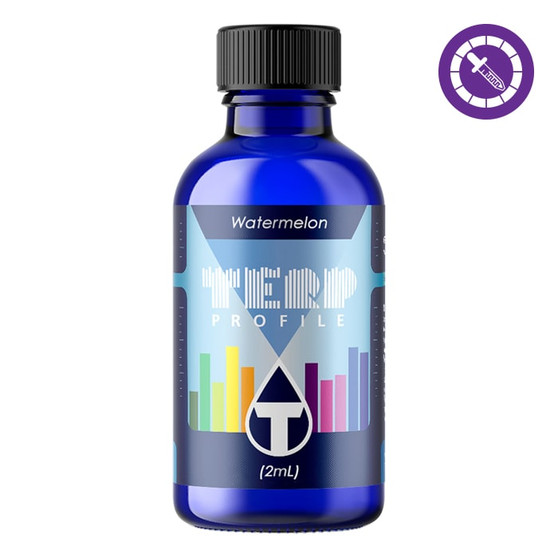 True Terpenes is a leader in precision botanical terpene blends using pure, food grade isolated compounds derived from non-cannabis sources. Each profile is curated using quality analytics to positively reflect their namesake plant. The following information is intended to inform our audience of the origins and cultural significance behind our botanical strain profile.

Watermelon is an indica strain that packs a potent flavor profile along with a mysterious background. We currently know little about its genetic history, and no cultivators have claimed to be its originators. The lack of information has made sourcing Watermelons seeds quite difficult, leaving growers to rely on clippings if they want to create clones of this hashy, fruity and earthy strain.

What we do know is its terpene profile. Watermelons terpene profile is dominated by 32% beta caryophyllene, and mostly rounded out by myrcene (19%), limonene (17%) and humulene (10%) with a range of other terpenes making up 10% or less of the profile each. Its THC content levels are known to vary typically between 11% and 22% and boast an 80:20 indica to sativa ratio.

With a name like Watermelon, it is only expected that it comes with a fruity aroma. However, instead of getting walloped with watermelon flavors, some report experiencing its subtleties that may have you feeling a bit like a Sommelier when picking up its profile. In other cases, youll hear about the delicious and potent aroma being present right away. This variety of responses could be an indication of replica strains instead of the source material, though that is mostly conjecture.

In addition to a Watermelon aroma, consumers often point out additional fruit hints, mainly grape and berries, as well. When ground up, Watermelon is known to give off a skunky smell. The skunky notes have led some, like Wikileaf, to consider if Watermelons genetic origin could have OG Kush somewhere in its lineage.

This is a strain known for providing long-lasting easing effects on consumers. As an indica-dominant strain, it is known as powerful soothing aid. Furthermore, it is known by users for enhancing happiness and uplifting them.

By taking a slow onset effect, Watermelon often provides consumers with a slow-acting experience that builds over time before settling in for the long haul. In some cases, users have reported feeling their thoughts completely flush away as its effects take hold.

Today, Watermelon continues to be an elusive strain. Adult consumers seek out its long-lasting, slow-burning effects that are known to melt minds. So, if you are looking for a terpene that will have you smelling summer while kicking back in a level of comfort you cant recall experiencing before, then Watermelon may be the one for you.