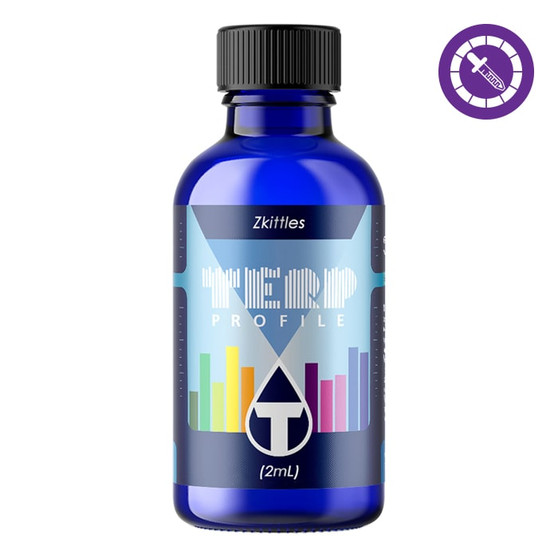 True Terpenes is a leader in precision botanical terpene blends using pure, food grade isolated compounds derived from non-cannabis sources. Each profile is curated using quality analytics to positively reflect their namesake plant. The following information is intended to inform our audience of the origins and cultural significance behind our botanical strain profile.

Zkittlez is a strain that packs about as much fruity flavor into each bud as the candy it is also known by. This indica-dominant strain provides comfort all around while touting a high-level THC potency. Zkittlez is revered by enthusiasts and consumers alike. So much so, that it won the Best Indica at the Michigan High Times Cannabis Cup in 2015.

Created by Northern Californias Dying Breed Seeds, Zkittlez descends from two well-known and beloved strains, the indica Grape Ape and sativa Grapefruit. Beyond this info, little is known about the strain. It is not currently for sale and can only be produced from clippings.

Like a bag of Skittles, Zkittlez offers a mixed bag of aromas and flavors that stands out amongst the crowd. Consumers are sure to pick up on a sweet fragrance as well as citrus and sour notes. When left out, it fills the room with a herbal aroma that is sure to please the senses.

Zkittlezs terpene accumulation is chock full of beta caryophyllene, comprising nearly half its profile at 41%. Humulene (18%) and linalool (13%) are the second and third most present terpenes. The rest is rounded out by terpenes that each make up 8% or less of Zkittlezs profile. While some results have placed the strains THC content at a lower percentage, the folks at Wikileaf found Zkittlez to have an average potency, 19%, that is well above the average indicas 13.5%. Additionally, Wikileafs analysis reported its highest potency at a noteworthy 23%.

With its ability to act fast and robust, Zkittlez may not be suitable to novice consumers at first. Consumers typically feel a range of effects that tend to span happy to at peace to focused. In all, spirits tend to get lifted along with the user. It is known to act fast and starts at the top before moving down. While most feel comfort, others have reported the more stranger effects including distortions in sound, sight and even time. Despite these effects, consumers also tend to feel focused on their tasks and thoughts.

With the ability to ease all around, Zkittlez has found a diverse following. Its combination of lifting spirits and lettings consumers focus has made it beneficial in keeping people awake just as it can put people to rest thanks to its classic indica properties.

This award winning strain has won the hearts of numerous cannabis consumers since its creation. As a hard to come by strain, cultivating Zkittlez is a task in and of itself. Thankfully, it is a strain that provides comfort in a series of ways. So, heres hoping the growers are enjoying the flower as much as we consumers have been.

True Terpene Profiles enable you to customize the flavor, effect, and viscosity of your products thr…

True Terpene Profiles enable you to customize the flavor, effect, and viscosity of your products thr…